The AnyTone AT-D578UVIIIPRO offers a wide range of features in a triband DMR/FM transceiver.

The AT-D578UVIIIPRO offers many features, including Bluetooth, a Global Positioning System (GPS) receiver, and support for Automatic Packet Reporting System (APRS) operation. The transceiver operates in full duplex, supports DMR roaming, and supports cross-mode operation with one VFO in analog and the other in DMR when the cross-band repeat function is activated.

Included in the box with the AT-D578UVIIIPRO radio is a built-in Bluetooth module, an external Bluetooth push-to-talk (PTT) key with an elastic bracelet, a handheld microphone, an external GPS antenna, a mobile bracket with assorted hardware, a fused dc power cable, a USB-to-microUSB programming cable, spare fuses, and a user manual. You can download the programming software (CPS) from AnyTone or from your dealer’s website.

The AT-D578UVIIIPRO doesn’t have a detachable remote head for mobile installations. However, the radio is very small, and it will probably fit in most vehicles somewhere under the dash.

The front panel with its 1.77-inch color display is attractive. The downside of a small package like this is that the screen and controls are small as well, but it’s still highly functional. There are six programmable keys next to the display, plus a multifunction button that is also a programmable pushbutton.

There are two separate volume knobs, one for each VFO. Volume levels are adjustable in steps, and I found it hard to adjust for low volume. It switches from nothing to a medium-low volume level, behavior that I have seen on other DMR transceivers.

Many important quick-access buttons are available on the hand microphone. Functions include toggling between the main and sub VFOs, DTMF tones, and up/down buttons on top for frequency or memory changes. On the mic, there are also dedicated buttons for menu navigation (menu, zone up, zone down, and exit).

On the rear panel, you will find two antenna ports. One is for the external GPS using an SMA female connector (see Figure 2). The other is a standard UHF female connector (SO-239) with an integrated triplexer for triband operation with a single feed line.

Next to the GPS antenna port is a removable rubber cap with two Vs-inch speaker output jacks that can be configured with separate output for each receiver (VFO A and B). You can also pair the radio with your car stereo for listening to received audio via Bluetooth (if your car has that capability) and still use the external PTT at the same time.

Customizing the Transceiver Using the CPS

The CPS programming software for the AT-D578UVIIIPRO is identical to the software used for AnyTone’s DMR handheld radios. With a new DMR radio, there is always a learning curve before you become familiar with its functions.

Some features are not available until you check a box or enable a setting in the software. For example, by default, you won’t find the setup menu for APRS if you do not activate the feature first. The same holds for Bluetooth and GPS. To enable these features, go into the CPS tool tab, and choose the options you want.

After I installed the CPS, I wondered if the code plug from my AnyTone AT-D878UV handheld would be compatible. It’s not as simple as opening the handheld’s code plug into the mobile radio’s CPS software, but you won’t have to start from scratch.

You can import a code plug for the AT-D878UV handheld and edit it for the mobile transceiver. The AT-D578UVIIIPRO can be configured manually from the front panel, and you can build a code plug from the keypad if you are patient. However, I strongly recommend taking the time to build a comprehensive code plug using the CPS software.

Operation on the Air

I tested the radio using analog and digital modes in simplex and on repeaters and received very good feedback about the audio quality. If you’re already familiar with the AnyTone AT-D868UV or the AT-D878UV, operating this unit will be easy. All the submenus are the same, but with more features.

Keep in mind that the analog APRS support is for transmit only. You can send your position manually or as a timed beacon, but you won’t be receiving any APRS beacons or displaying them on the screen.

I wondered if the radio supports cross-band repeat in DMR as well as analog FM. I started my test in analog (both VFO A and B in FM), and it worked. Then I tried DMR (on both VFOs), and it worked. Then I tried one VFO set for DMR operation and one for analog FM, and I was very surprised to see that it did crossmode between the two VFOs. Yes, you can use an analog radio to talk to a DMR radio using this feature.

Keep in mind that the DMR color code (analogous to an access tone in analog FM), time slot (TS), and talk group (TG) have to be set correctly if you want to do this. I tried it with my DMR hotspot, and it worked fine. When using a DMR handheld to communicate cross-mode to analog FM, the mobile radio needs to have the same DMR configuration as the handheld for the audio to be decoded.

For the test, I made sure that neither radio was in dual-TS monitor mode. It was a bit confusing, but if the handheld configuration didn’t match the mobile radio’s TG or the color code, I couldn’t hear anything. If you’re considering this unit specifically for its crossmode capabilities, you should confirm with your local dealer that it will work specifically for the intended application.

When you transmit, the fans start as soon as you push the PTT button. I thought the fans were a bit loud, particularly in my quiet home station. That may or may not be the case in a mobile installation, depending on the normal road and wind noise in your vehicle.

I guess this is a compromise with a high-power transmitter in a small form factor. I recommend keeping both VFOs set to low power if you operate using the cross-band repeat function, as it gets pretty hot. Keep in mind that in cross-band repeat mode, the radio will transmit as soon as it receives a signal or the squelch opens.

This triband radio adds the 1.25-meter band and offers quite a few features that hams expect in a VHF/ UHF transceiver. AnyTone has announced a forthcoming Bluetooth microphone with integrated display that would be a great addition for mobile operation. I also like that you can use any analog handheld to talk to DMR radios via the cross-mode feature. The ARRL Lab did note that receiver sensitivity is lower on 1.25 meters than on the other two bands.

ARRL purchased the review radio from BridgeCom Systems. Their website’s Support section has a page with downloadable firmware updates and videos showing how to update the firmware and get started with the CPS software. The purchase price also includes a coupon for free access to BridgeCom University, a series of online lessons on various aspects of installing and using the AT-D578UVIIIPRO. 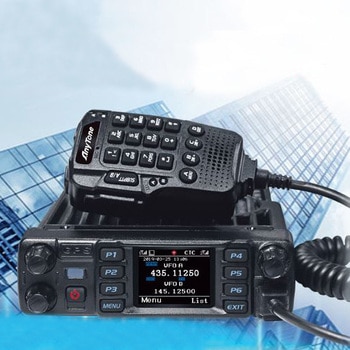