Originally the RX666 (BBRF103) was designed by Oscar Steila (Turin), under the name DRAGONFLY. It is a direct sampling 16bit SDR that transmits signals from 1kHz to 32MHz in real time with 64Mbps sampling rate and can be used up to 1.8GHz via the built-in R820 chip.

The unusual thing about this SDR is that no FPGA chip is used between the ADC and the PC. Instead, the entire RF spectrum up to 32MHz is processed by the host computer, which is connected to the SDR via a USB3 cable and Cypress FX3. The PC thus becomes part of the recipient. A powerful PC (i5) with a USB3 connection is required for this extremely fast data transfer to work.

The RX888 is the further development of the RX666, built in and in a solid steel housing with several heat sinks, all of which makes a very solid impression. The heat sinks are necessary, because a 16bit ADC (LTC2208) draws a lot of current and gets quite warm.

The power is supplied from the PC; an external power supply unit cannot be connected. If the PC does not manage to supply the RX888 with enough power, you can also connect an external USB3 hub with 2.5A power supply. The two SMA sockets are intended for connecting the HF (0-32MHz) and VHF / UHF antenna (32MHz-1.8GHz).

The RX888 is manufactured and sold by Chinese companies. After I got the SDR discovered a few months ago on the Internet, I looked for a supplier in China via Google and eBay and ordered the RX888 for € 178. I felt a bit uneasy about whether that would work? The delivery time should be 4-6 weeks.

A week later I received a response from the supplier that the RX888 was currently not available and whether I wanted to withdraw from the purchase contract. I said no and the supplier thanked me and promised to deliver as soon as possible.

Three weeks later, the RX888 plus USB3 cable was delivered by DHL in an inconspicuous little box with no Chinese labeling on it. At the same time I received an e-mail from the supplier asking whether everything had arrived safely and he sent me an Internet address in the attachment, where I can download the necessary files for the software.

It couldn’t be better! I mention this in so much detail here because I am very satisfied with the order and delivery from China. My supplier from China was friendly, customer-oriented and helpful.

The installation of the RX888 in connection with the HDSDR software is described below. It takes three steps to do this.

First a special USB3 driver has to be installed. To do this, download the “Cypress FX3 USB BootLoader Device” from the website https://community.cypress.com/docs/DOC-12366 and save it in a directory.

When connecting the RX888 via USB3, the Device manager of the PC under Other motto a WestBridge driver, but it is not recognized. WestBridge click on Update driver go, select the path to the Cypress FX3 directory and install the driver for Win 10, X64 or X86. The message then appears that the “Cypress FX3 USB BootLoader Device” has been successfully installed.

After installing the Cypree FX, the RX888 can transfer the data from its A/D converter to the PC via USB 3 at a speed of 32MHz. After restarting the PC, the Cypress FX3 driver is then under Device Manager -> USB controller to find.

The HDSDR software is freely available and can be downloaded from http://hdsdr.de/. After installing HSDR, are in the folder C: \ Program Files (X86) \ HDSDR

a total of 7 files. However, the software cannot yet be started because the appropriate firmware is still missing.

To start HDSDR, a few files have to be added

The HSDPR folder under C: \ Program Files (X86) \ HDSDR again open and copy the three files into the directory. The HSDR folder then looks like


Shown. Three files have been added, there are now 10 in total.

After pressing on SDR device (F8) The “Control Console” opens, through which various settings can be made. The console first shows that the RX888 is connected and the transmission speed currently being used: ADC rate 63.951 Msps, I&Q rate 31.936 Msps.

The Sample rate can be set from 2 to 32MHz. If the PC stalls at 32MHz, you should choose a lower sampling rate. Under Gain an attenuation of 10dB or 20dB (ATT) can be switched upstream in the HF band and an HF pre-amplification (VGA) for VHF / UHF. The “Random / Dither” function can also be activated. Later more.

HDSDR works flawlessly from 1kHz to 1.8GHz. In the HF band, the span can be increased to 32MHz, after which the entire spectrum is displayed live over a bandwidth of 0-32 MHz. In the VHF / UHF range, the max.span is reduced to 8MHz.

With its performance, the RX888 outshines all other SDRs such as the SDRplay, KiwiSDR, Airspay or ColibriNANO and represents a “new generation” of direct-scanning SDRs. And all at an unbeatable price!

The sensitivity in the HF and VHF / UHF bands is sufficient. If the SDR should be overdriven, a 10dB or 20dB attenuator can be connected upstream.

Side bath noise (SBN and RMDR)

The RMDR is over 100dB at all distances to the carrier. The sideband noise is so low at -137dBm / Hz at a distance of 2kHz that small signals and very large signals are not covered by the SBN of the RX888.

In this measurement, the receiver is controlled with two CW signals that are 2kHz apart, in the example 7.050MHz and 7.052MHz. Both signals are enlarged until the first intermodulation products appear with 3dB above the noise (MDS), i.e. with a level of -125dBm / 500Hz. The blue curve in shows the intermodulation curve.

The first interference products appear at -75dBm. Then the curve runs in waves up to saturation (clipping) at approx. -14dBm. This IM curve is typical for an A / D converter. In the sweet spot, the highest dynamic range of -26dBm – (-116dBm) = 90dB is achieved.

The green measurement curve shows the IMD3 course with activated dither / random function. Due to the dithering, the previously visible IM signals – which in reality are not at all – de-correlate and disappear completely in the noise.

Figures 10a and 10b shows the difference between the IMD3 measurement with and without dither and random with the same control. With dither and all IM interference products disappear completely in the noise. A deterioration in the background noise (MDS) cannot be determined when Dither & Random is activated.

Note: When connecting a HF antenna, the background noise of the antenna is also fed to the receiver. This noise is usually enough to cause dithering in the ADC. For this reason, in QSO operation you will usually not notice any difference whether dither / random is activated or not. As a rule, both functions can remain deactivated.

A noise signal is fed to the receiver and increased until there is a noise increase of 3 dB in the upstream notch filter (2.4 MHz). NPR is a measure of the large signal immunity of the receiver

An NPR of 73dB is an excellent value for a broadband, direct sampling SDR! Obviously, the difference between 14Bit and 16Bit can also be seen here.

The RX888 doesn’t need to hide when it comes to the HF data either, sensitivity and sideband noise are good, the dynamics are excellent and the large-signal immunity (NPR) shows the best value of all SDRs that I have measured so far.

The only problem might be its broadband. Since only a 32MHz TP filter is installed, it has to process all signals that the antenna supplies at the same time. In my tests in the 80, 40 and 20m band, I was sometimes able to determine an overload when the bands were open, which is shown in the display with the red message <!!! Clip !!!>. An SDR is always overridden when its ADC is controlled with signals greater than 0dBFS (full scale).

A simple way of preventing this is by adding an attenuation of 10 or 20 dB. The other possibility is by connecting switchable, selective bandpass filters.

With the RX888, clipping only takes place at a signal size of -14dBm (S9 + 59dB). What I also noticed positively was that even at a level of + 10dBFS, the reception of small signals was not impaired.

∗ SS refers to SuperSpeed, a new transfer rate that can transfer data at up to 5 Gbit/s (625 MB/s), which is ten times faster than USB 2.0. Impressive.

Any USB device can benefit from faster transfer speeds using the SuperSpeed ports.

It is recommended that manufacturers label SuperSpeed ports SS and use blue colored cables, so you know Superspeed is supported.

USB 3.0 has been upgraded to USB 3.1, and finally 3.2 in 2017. Each version supports SuperSpeed preserving the original speeds while still increasing the speeds even further. 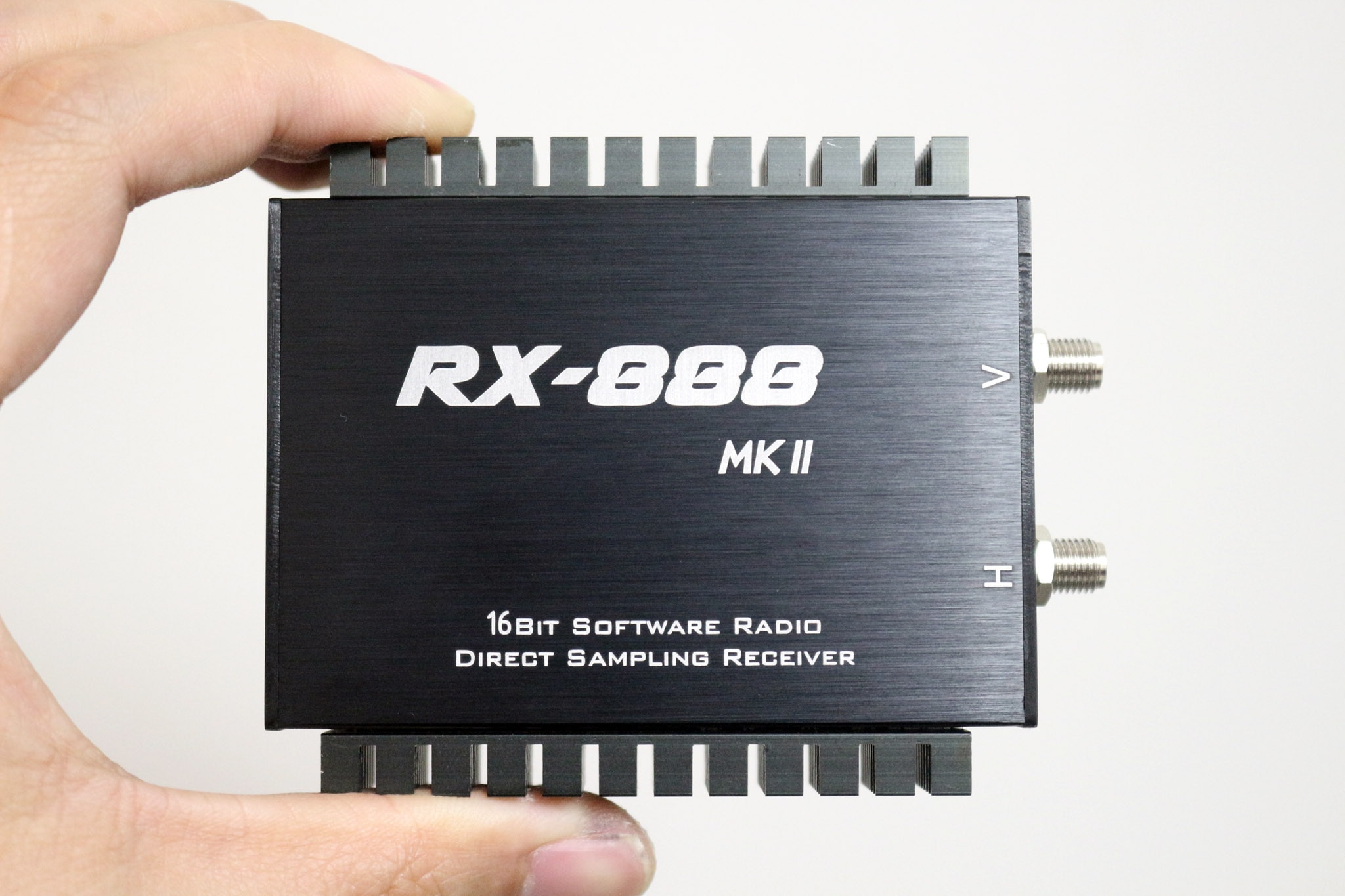